CNM’s Cosmetology students that are getting ready to graduate hold a fashion show as part of their final project and to showcase what they have learned, said Cosmetology Instructor Babette Reeves.

The fashion shows are held at the end of the Spring and Fall semesters because that is when students graduate from the School of Cosmetology, she said.

The fashion show is free to attend and refreshments are provided to guests, Reeves said.

For more information on future fashion shows people can contact the Cosmetology department at (505) 224-5034.

The last fashion show was held in Smith Brasher Hall 101 on December 5th, 2015 and was titled “Aphrodite’s Apocalypse.”

It featured models that were created to look like Greek gods and goddesses, as well as post-apocalyptic survivors and warriors, she said.

The name and theme of the show were chosen by CNM’s graduating cosmetology students, Reeves said.

Graduating cosmetology student Kelly Nolan said that the graduating students got together to go over their ideas on what the theme of the fashion show should be and then they choose together.

After choosing a theme and name, the graduating seniors came up with character ideas and then had to find and bring in their own models to work with, she said.

The graduating students are also responsible for coming up with the costume ideas and overall design of the fashion show, Reeves said.

Not only are the students responsible for the ideas of the fashion show but they have to find or create the costumes and props that the models will be wearing.

“They do hair, makeup, and the outfits,” Reeves said.

They do all of this on their time.

Nolan had three models, one of which was herself, where she modeled the Greek goddess Aphrodite.

Emily Pino, one of Nolan’s models who was created into the goddess of war, said that she was excited for the fashion show.

Graduating student Mustafa Alsioury had two models in the fashion show, both of which were created to represent the post apocalypse.

There was also a belly dancing performance put on in the middle of the fashion show by Dani Gutierrez which Alsioury was also a part of.

When asked about plans after graduation, student Kelly Nolan said that she had been offered a job at her internship but will take time off through January to rest and visit family before going to work full time.

Student Mustafa Alsioury, said that he planned to work at a salon for two years and hopes to continue working with the great and humble clientele that he has built.

During the course of their schooling the cosmetology students learn a variety of skills including but not limited to hair trimming, cutting, styling, coloring, highlighting, conditioning and waxing. 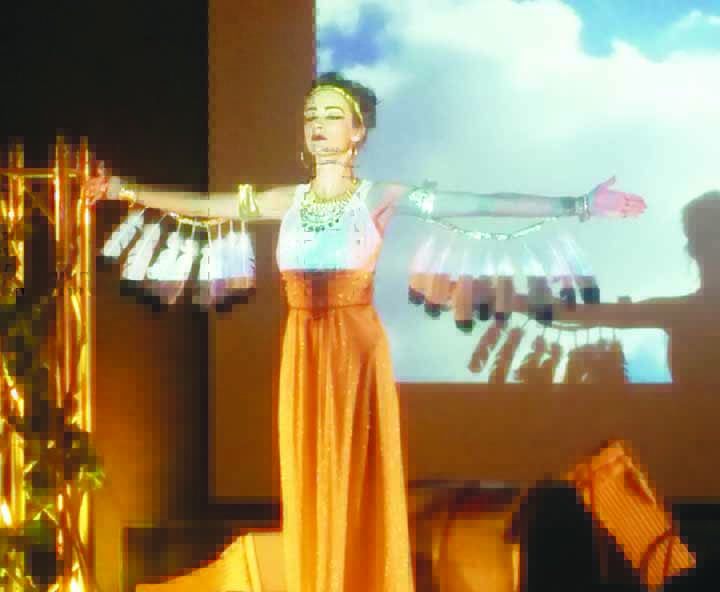 Free haircut appointments are available through them and the hours for that are: